Inspiration from a Child 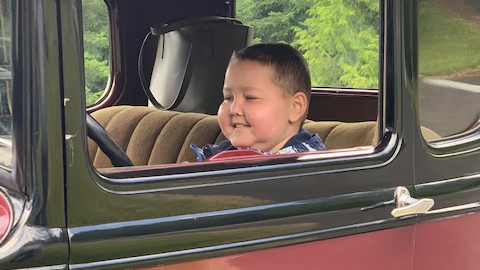 Today I want to introduce you to an 8-year-old boy who went to be with the Lord a week ago. His name is William but we called him “Willy”. Willy was the grandson of our good friends.

Our first experience with Willy was at Christmas a few years ago. We have a small Christmas tree farm and he came to pick out and cut down a tree with his grandparents. He was approximately 4-5 years old. Immediately, there was just something about this boy that was special. He was quiet and polite. However, he had a smile that absolutely melted our hearts. We instantly loved this little guy.

As life goes….we did not see him much over the next year or so, however, we heard stories about how much he loved building with Legos, superheroes, nerf guns, and playing video games. A typical little boy growing up in a household that loved him deeply.

Then one day we received a tearful call from his grandpa telling us that he was in the hospital with a malignant brain tumor. He was 6 years old! This child with a giant smile was facing surgery and an uncertain future. Of course, our question to God was why this precious boy? Our hearts were broken for him and his grandparents.

Because of the aggressiveness of his cancer, his physician made the decision to do intense chemo and radiation. This meant sometimes having to be admitted to the hospital because of possible severe side effects. Because of his great attitude and always up for having fun, the doctors became some of his best friends. The staff loved him. He endured surgeries and side-effects that any adult would have a hard time getting through. Did this boy complain? The only time was early on when he didn’t want an IV in his arm. The doctors were amazed at how well he handled the treatments and how he never seemed to give up. He was actually giving all of us strength to keep praying and to be optimistic. By this time, Willy was being prayed for by many people who did not even know him from churches all over the area and clear down to Palm Springs. We prayed for a miracle.

For over a year we watched him go through the treatments, miss school and his friends, go back and forth to the hospital, have tons of tests and transfusions and he did it without losing his smile or question why this was happening to him. Every time we came to visit him, he was excited to see us and greeted us with a hug and a smile. In fact, I think he had a crush on me because he blessed me with a gift of his “special rocks” for Christmas. And then the big day came when he was declared cancer free in February 2020. He got to ring the bell at Doernbecher and was scheduled to go to Disneyland with the Make A Wish program for his birthday celebration, however, Covid put an end to that trip. Willy probably didn’t really understand how many people had been praying for him over that year of treatment. We were all thrilled that God had answered all of our prayers by putting him in remission.

Three months later, we received a call we hoped would never happen. The cancer had returned with a vengeance and was affecting his brain and spine. The outlook was bleak.
Again, he was put on massive doses of meds and chemo. However, he had many side-effects and the chemo did not help. His grandparents were told to spend as much quality time as they could with him. Again, he rarely complained. He knew he was getting worse and reassured his grandma that he wasn’t afraid to die. His grandparents were incredible in caring for him at home. I’m not sure how many games of “Sorry” they played with him in the last days. It was his favorite game. Their hearts were breaking but they found strength to be positive and show him so much love. I believe that strength came from God as well as Willy.

We wanted to do something special with him, so my husband took him out for ice-cream and a ride in his 1931 model A Ford. Even though he was obviously very sick, he wanted to spend this time with Ken. In fact, he told us no one else could go with them. 😊 His appetite had not been very good, but he ate the ENTIRE ice-cream cone with no problem. 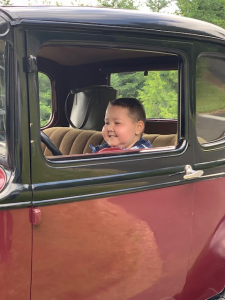 Our last visit with him was two weeks before he passed. When I walked into the room, he was visibly very sick, but he flashed me a smile the best he could and held his arms out to me for a hug. I did not know that would be my last hug from him, but that hug will forever be in my heart. He was a trooper to the very end.

The reason I wanted to tell you Willy’s story is because it was a two year period of time that I watched God work in Willy, his grandparents, church members who did not know him but covered him in constant prayer, and in my husband and me. Willy inspired all of us with his attitude, his never ceasing ability to confront hardships without complaining, and the love he gave to all of us. His grandparents were a stellar example of giving unconditional love and care to Willy. He could rest in the confidence that he was not alone while going through all he faced. I watched God give his grandparents all they needed to get through the worst time of their lives…knowing they were losing their sweet boy. God touched the hearts of so many people and churches and brought them to pray and help in many ways, again showing the love of Jesus. As for my husband and I, we were going through a hard time in our own lives at that time, and when we saw Willy’s strength to face days and months of illness, medical procedures, and treatments, it gave us motivation to keep going as well.

God meets us in our everyday aches, pain, and grief. When we are quiet, we sense his presence. He comes to fill the empty holes in our lives. Even though we do not understand why things like the death of an 8-year-old child happens, God promises it is not a mistake or something that caught Him unaware. He answered our prayer and gave us a few more months with Willy. Each and everything that happens in our lives will affect or influence the lives of someone else. Nothing is wasted with God. We can come to Him dragging ourselves and He meets us with peace. God sends people into our lives, like Willy, to inspire and remind us that we don’t face hard things alone, and we have been given the strength to endure the fight while we are still on this earth.

What can we learn from Willy’s story for our lives going forward? Take every opportunity you have to look for God in every situation going on around you. I assure you He is there. I challenge you to also act without hesitation when you feel led to comfort or serve in some way. Your presence and words could be just what someone needs at that moment. We should not wait for someone else to move first. Open your hearts to others if you are in need of being lifted up. That lifting up could even be found in the form of an 8-year-old boy.

Our job on this earth is to show Jesus to those that He brings into our lives. Willy’s story does just that. This is a story of blessing, love, the joy in the privilege of knowing Willy, and an opportunity to serve Willy and his family. Willy’s story is a testimony to those watching of Jesus’ love for us. Jesus calls us to live in His image and look to Him and serve one another. Because of his love for us He came to live among us, die, and be risen back to life so that we can have eternal life with Him. Willy has already seen Jesus face-to-face and all believers have the same to look forward to. During these days of fears, anxiety, and uncertainty, we all have the assurance that God promises He will help us and give us exactly what we need to survive what comes our way. That’s not to say it will be easy, but when it’s over we can look back and see God’s hand all over the situation. So, friends, be encouraged. Jesus has overcome the world!

John 16:33: “I have told you these things, so that in me you may have peace. In this world you will have trouble. But take heart! I have overcome the world.” (from New International Version)

9 The LORD is good to all;
he has compassion on all he has made.
10 All you have made will praise you, O LORD;
your saints will extol you.
11 They will tell of the glory of your kingdom
and speak of your might,
12 so that all men may know of your mighty acts
and the glorious splendor of your kingdom.
13 Your kingdom is an everlasting kingdom,
and your dominion endures through all generations. (NIV)